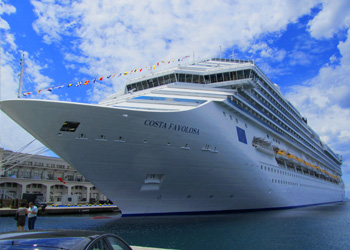 Working closely with producer and director Heather von Ruben, I produce music for theater shows for the “Costa” fleet of luxury cruise liners in Italy. I find these projects to be the most enjoyable and challenging, simply because of the vast variety of styles of music I have to arrange and produce.

The repertoire includes old and current pop hits, songs from movies and musicals, classical and orchestral, ballet, rock, dance, funk, salsa and big band jazz, sung in English, Italian, Spanish, French and German. After being briefed by the producer and choreographer, it can take me up to four months to produce music in my recording studio for two new shows for a ship.

These shows normally run for a period of four years. The dancers and singers usually change over after a six-month contract. Sometimes during a change-over, parts of the music has to be remixed to accommodate different singers’ voices in different keys. All of this mixing also happens in my studio in South Africa.

In some instances I accompany new ships on the maiden voyage to help finalize the show before it is performed to an audience for the first time.

In March 2013 I completed my 15th and 16th show for the Costa Deliziosa 100 day world tour. In 2012 two of our shows “tipped over” when the Costa Concordia capsized and sank after striking an underwater obstruction off Isola del Giglio.

Click on the images below to see pictures of the shows and some of the ships I have visited.